What do you want to see in Armagetron soon? Any new feature ideas? Let's ponder these ground breaking ideas...
Post Reply
76 posts

Agreed. I am trying to avoid putting anything on top because it interferes with the chat area. I have more ideas to work on over the next several weeks. Doing an incam cockpit right now — with the lightcycle body included!

This cockpit code is frustrating because of it's limitations. Lot's of things break. I may have to compile the cockpit branch and see if that helps.
Armagetron MERCH
adventuresoftron.com
Top

The chat area on my 0.4 client is only in the top left corner. Ok, so I have reduced the size of the text (using CONSOLE_COLUMNS), but still. I too like the idea of using the space in the top right corner for FPS/clock/whatever.
Playing since December 2006
Top

Monkey wrote: Ok, so I have reduced the size of the text (using CONSOLE_COLUMNS), .

I use console columns too, maybe not to the extent that text is only in one corner but I do find that it's easier to have smaller text and be able to play instead of having to scroll down every time the text covers half the screen, be it to conquering zones in sumo or just chatty people. From a competitive standpoint I rather miss some text than miss someone sneaking up behind me because I need to know that it's 2:32

Battery level would be handy for those of us who play on laptops.
Top

Magi wrote:It looks nice so far, but the one thing I dislike is how cluttered the bottom left is, that's a lot of stuff in one corner and I think the time/fps is better suited for the top right or left of the screen

I meant to respond to this topic but Magi had it covered anyways. I think the prototype images look phenomenal. Seriously, great job. I'd love for that to be my cockpit.

However, the bottom left and right of my screen are usually the most important bits, a large part of why I haven't even used the minimap much. I think if you could move the little tidbit at the bottom left up to the top right, it would be considerably better. (Well, IMO)


Kinda Slow wrote:Battery level would be handy for those of us who play on laptops.

*Full disclaimer: I have absolutely NO CLUE how cockpit coding works, nor the things that would need to be done in order to achieve your request. My response was a shot in the dark and makes sense to me

*Full disclaimer: I have absolutely NO CLUE how cockpit coding works, nor the things that would need to be done in order to achieve your request. My response was a shot in the dark and makes sense to me

Actually, that would be pretty easy. Just make a new data source "batteryLevel" that returns a number between 0 and 1. The tricky bit is getting the information from the desktop environment in a platform-neutral way. Maybe SDL2 has it? In any case, data sources *can* be written anywhere, but most of them are in one or two files, if I'm remembering correctly. The cockpit was written specifically to make adding new data sources easy, after all.

After the data source exists, the information can easily be incorporated into pretty much any widget. Hell, you could put a background widget the size of the viewport that is transparent all the time, but once battery level drops below 15% it turns to red with 15% alpha so you can finish playing, but clearly you get told your battery is dying.

Cockpits don't make a real difference to gameplay, and those who think otherwise can always change theirs, so I think the goal here should just be something that looks good to a new player while being functional enough we aren't doing them a disservice. Sine's current iteration is great, and I'm sure the final will be even better. The game's font has the tendency to make everything look awful, however. I know the font is customizable in 0.4, but a new default is also long overdue in my opinion.
Top

Here is that in-cam cockpit you've been wanting for years.

It breaks at different aspect ratios, so I'm not going to release it at this time. I'm not even sure it will work correctly even with the cockpit-branch. Will that ever be merged? What's is holding it back?

I get an error:

The image in question always throws the error no matter what size. Currently it is 512 x 1536. I've tried saving the PNG from Gimp with several options and nothing changes it. I have another image that is 256 x 1536 that does not show a warning. This is in Arma 0.4_alpha_z2297.

Probably not an issue. Just looking forward to making the best cockpits ever.

Also, good with no cycle-body. Graphics get in the way of Center Text Message, but not in a bad way, IMO.

Lucifer wrote:Maybe SDL2 has it?

The power of two error means that both height and width should be a power of two (e.g 512x2048). I don't exactly know why that error is a thing though.

Below is a quick layout sketch based on the survey and feedback in this thread. I think it is important to point out that the cockpit has 5 assignable keys to toggle elements on and off. I made a quick video showing these keys in action using the "angular monochrome" cockpit above.

According to this post by Z-Man, we are looking for 4 cockpits to bundle with the new release. Those are:

A slick default cockpit with the relevant stuff there, but not too overcrowded.

A completely empty one

The last two are already on the wiki. Based on feedback here, "minimal" might mean the lowest row on the sketch below.

Given the flexibility of the cockpit code, using toggle switches can make the same cockpit "relevant", "minimal", and "empty." Turning things on and off is no harder than pressing TAB to see your score and ping. Now that I've been using my test cockpit above I am immediately spoiled by the toggle keys. I'll never go back to the default cockpit or 0.2.x. I'm completely converted, wow!

If anyone else wants to sketch their ideas, let's see them. The image below is made using Gimp to draw over a screenshot. I want to get the general placement and functionality down before I start making things "slick."

My current cockpit looks about like this (the green stuff is the cycle :p): 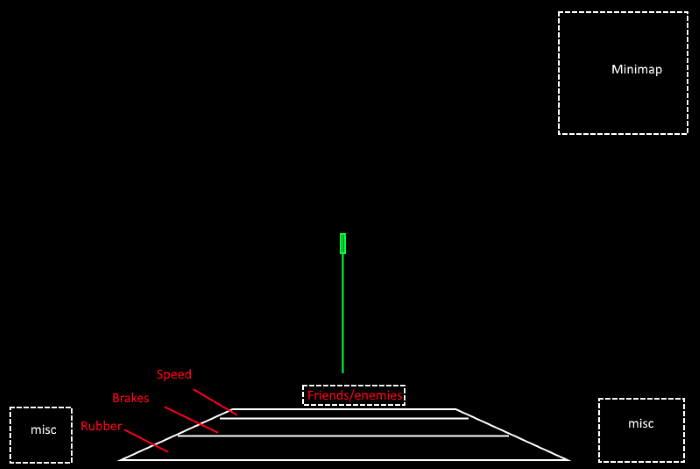 The misc boxes and minimap have toggle keys of course.
It's probably not good for first time players because on yours you can have "brake", "rubber", "speed" labels above the bars while here it's not so easy. On the other hand the center part is very compact and gives space to see what's going on. I do think yours is still better there but maybe it gives you some ideas, who knows

Lucifer wrote:Maybe SDL2 has it?

Good eye! Added to the 0.4 list. I just can't see adding this being a bad thing.

Be the devil's own, Lucifer's my name.
- Iron Maiden
Top
Post Reply
76 posts