For things that have to do with those crazy test servers... and yeah. By request of z-man, and, of course, you gotta obey...

a) Most effective tactics were not intuitive
The best ways to attack in competitive fortress were holing and centering. Neither is necessarily intuitive, and holing in particular had a very high psychological threshold for players to execute. The game trains you to not die, but the most effective attacking method required someone on your team to deny that basic instinct and suicide themselves. While that was sometimes compelling and led to a lot of dynamic gameplay, it more often had lot of negative side effects. Centering gave way too much influence over the outcome of a round to a small number of players. Moreover the ease of access to the zone granted by the location of the spawns made casual fortress often unplayable and got countless would-be players kicked.

b) holing negative side-effects
holing required killing one of your players, and so in turn this put a premium on having a numerical advantage. There's nothing wrong with player advantage being important, but the linear translation of 6v5->hole->5v5->gank was not a good dynamic. Both teams were super stressed to be up a man so that they could immediately give that numerical advantage away by holing. The best teams would usually be willing to put themselves down 5v6 by holing before someone died. In too many rounds, simply being alive was more important than doing something useful. Too many players were told to "just stay alive." Holing went against basic instincts of playing the game, it was also a high floor, low ceiling skill (hard to do as a team, but if you can do it, easy to do well).

This holing meta made centering even more attractive and important because it was the only opportunity to avoid the holing sub-game.

centering ruined otherwise competitive matches
So many matches ended being won because of centering/failure to stop centering. A lot of competitive play was preempted by what happened in the first 10 seconds of the round. This was exciting but also very bad because the only teams with a chance of winning an event were the ones with the best centers (usually no more than 2/3 elite centers at a given moment). The center was simply too influential and powerful and devalued every other aspect of playing fortress. This doesn't even touch on how grinding prevented players from joining fortress because they would be kicked. Centering was a non-intuitive (visually, can't even see how the center is getting in between walls) incredibly high floor, high ceiling skill that determined a huge share of rounds yet a tiny minority of players had any influence on or could do themselves.

No real ways to attack other than centering & holing (aka defender's advantage was too big)
It wasn't anyone's fault that holing and centering were so important. They were just the best ways of attacking. Defenders got really good. Ladle-quality defenders were getting cut in less than 5% of rounds. The basic mechanic of following the inside of your own tail is just a really elegant and really powerful way of defending space. Unlike holing and centering, defending was an intuitive, low floor, high ceiling skill and mechanic, but in competitive play a little OP.

Taken together, these changes are aimed to make shrinking more viable as a means of attacking. This makes defending far behind your tail riskier (small perimeter and harder to reclaim space) and shorter tail length makes defensive perimeter smaller to begin with anyway. Sweeping becomes concerned with reclaiming shrunken space, disrupting attackers shrinking aspects, and protecting against 2v1 exterior ganking. Optimally, the trade-off between shrinking and security means defenders have to expand more and not hide as much and cutting is more viable as well. Overall, this should reduce the incentive to hole while increasing skill ceiling of attacking, defending, and sweeping.

Move grind out of zone, but keep spawn position and idea of grinding intact.
Simple aim here: reduce importance of centering in competitive games and reduce damage of non-grinders in casual games. Maintain the grind as the splitting/flanking dynamic is overall pretty attractive and good, and the grind is an intuitive and appealing demonstration of teamwork. Multiple spawn positions could be tested, but my first try would be offsetting a 45° angle from old spawns, in what would be the top-right corner of a defender's perimeter.

Make zones closer together
This makes transitioning between attack and defense easier, reducing dead time driving between zones and making what is happening on each end of the grid more connected. The dead space of old fortress is basically a byproduct of the grind that could be reduced.

Make grid narrower
Add rim accel
Again, too much dead space. Giving rims acceleration makes flanking and the back of zones more unique areas. If there is a purpose for going to the horizontal walls, then you add a potential area for gameplay at very low cost. Old grid was 500x500, reduce to 400x400 or even 350x400

5v5
Makes it easier to form an organized team, also makes each cycle life less expendable. Creates inherent instability since you can have 3 players at attack or defense but not both. Simply deciding where to attack with 3 or defend with 3 vs what your opponent is doing creates a lot of decision points and different situations for teams to work through. Fewer players makes the cost of holing higher as you are sacrificing a larger fraction of your team. Also slightly increase importance of zone captures/winning rounds because there are fewer core-dump points to earn.
Last edited by blondie on Sun Dec 09, 2018 12:04 am, edited 1 time in total.
Top

I'm a bit of an outsider when it comes to fortress, but I do agree removing some of the dead space would be a bonus. A thinner play area would keep people a little closer together and provide a little more action. It may make it easier to build walls though blocking people from coming with little to no skill involved.
Top

i agree with most of what is said however shrinking is a valid tactic with the current settings it just takes a long time. But its very basic in its execution. making a basic skill quicker to implement is a bad thing no?

you want shrinking to be at least as effective as holing. The tactics are at least equal, then defenders have to try to expand and not shrink as much and what you actually get is more cutting. The effectiveness of shrinking and the amount of cutting that happens are directly related because the defender's fundamental trade off is security vs maintaining shape/size of perimeter. If shrinking isn't powerful enough, then defender can just play super secure (see last 70 ladles) and holing/centering become the best methods of attack.
Top

Anyway, I was thinking that I (and maybe all of us) probably have misunderstood holing. I/we were maybe biased because cutting came first and holing "ruined" that dynamic. But maybe that's just a false narrative that we created. Maybe holing isn't a problem. Really, isn't it the solutions to holing that are problematic? The superdefenses like sweepbox or the superconservative "just don't die" playstyles? I think I probably romanticized traditional cutting a bit as well.

I've also been think respawns are just a must-have in any game mode that already has long rounds. It's just not fun to be sitting around waiting for rounds to end, and you want people to be able to take risks without their death being disastrous for the team. Also respawns are great for new players. I think ultimately 2 points and being temporarily down a player should be enough of punishment for dying.

Below are some settings that might be interesting to try, or maybe they suck too. You can test everything except the respawn in local game by typing the below in console. The respawn part requires sty+ct.

This is the first draft of a map. It's a lot shorter than a normal fortress map, spawns are on the side, but you start with 45 speed to compensate for the respawns and lack of a grind. Zones are offset so you can get to set up before your opponents get there. Not sure if current sizes will actually work. My instinct is that because you can't defend very well with just one player or even two players, you will need to defend as a team and attack as a team. This hopefully means something like midfield control is important. Maybe it's just disfunctional chaos, I don't know.

Auto-respawn after 4 seconds, same time as it takes a wall to disappear. Less time sitting around dead, quick enough respawn to play aggressively, long enough it still matters if you die.


There are some other minor changes like invulernable time to make things work. I slowed down zone conquest a bit to give the defense more reaction time. The above are the big three that I think pretty dramatically change how the game players out without changing the gamemode beyond recognition.
Last edited by blondie on Wed Sep 16, 2020 3:32 am, edited 1 time in total.
Top

We just tested this a little, needs some work but the respawns felt fun. The short walls was a bit too much.
Top

I can't see a server on the masterlist for this, have you got a host? Would be fun to try!
The Halley's comet of Armagetron.
ps I'm not tokoyami
Top

No, but thump and agility and kite let me hijack their fort server last night for 10 min while we had 4v4 going.

I think it would be good in general to have a permanent fortress test server that's run kinda like a community garden, where multiple people can get access to test their settings. Ideally, we would have a semi-regular testing crew that scrimmaged at a set time on the weekend with different configs that people had prepared.

I feel strongly now that we have seen a full life cycle that fortress with traditional settings is inadequate. I think the life cycle would at best repeat itself if currently-existing fortress is the best team-game we have to offer people competitively.
Top

The concept is that fortress could have a map pool of 5-7 maps, and for a b03 teams would have a pick/ban phase to choose which maps would get played. Each picked map would be played for one match in a b03. All maps would have identical physics- this isn't intended to be CTWF- but should play slightly or significantly different than Z-Man's original map.

Teams would have more maps to prepare for and could get advantages by being better prepared on a certain map. If your team hates a map, they could always ban it and never be forced to play it. This could be a way to give fortress more of a dynamic and interesting meta. You could give higher seeds advantages in the pick/ban phase (they get to pick map order, for example, or they get to choose a ban second)

I currently have five maps, very quickly made and all rather simple. They are on a rotation script in the server so you can just play and see all of them rather quickly. 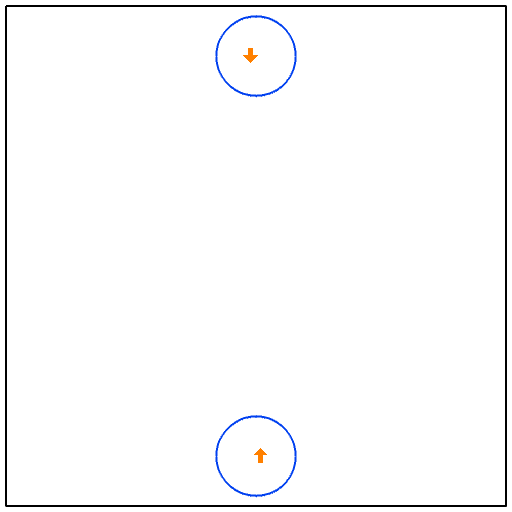 Classic fortress map, except side walls are much narrower

Classic fortress map, except zones are much closer together 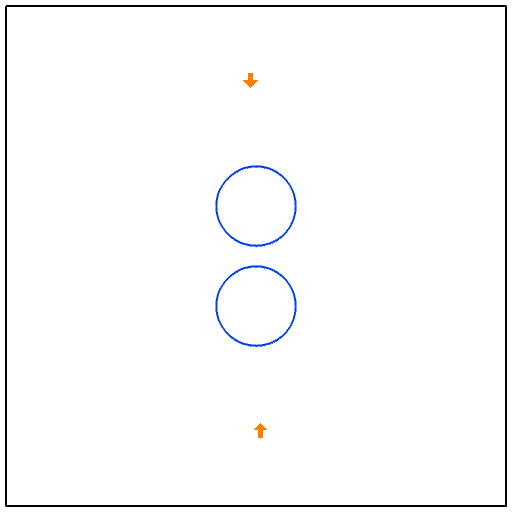 Classic fortress map, except each team has two zones to protect. You need to conquer both to win, but you get 4 points for each conquest. 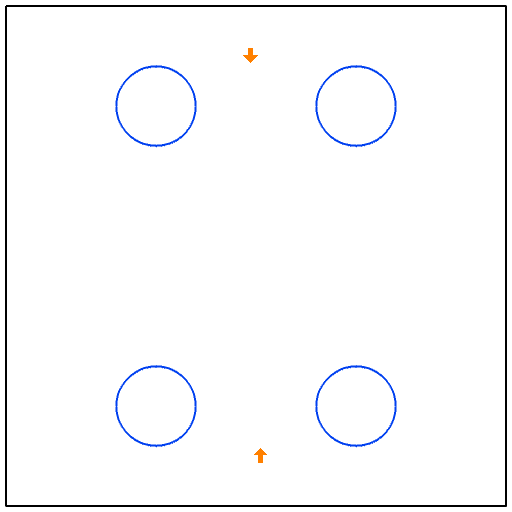 Classic fortress map, except teams spawn closer to the center, with higher speed, and further apart from teammates 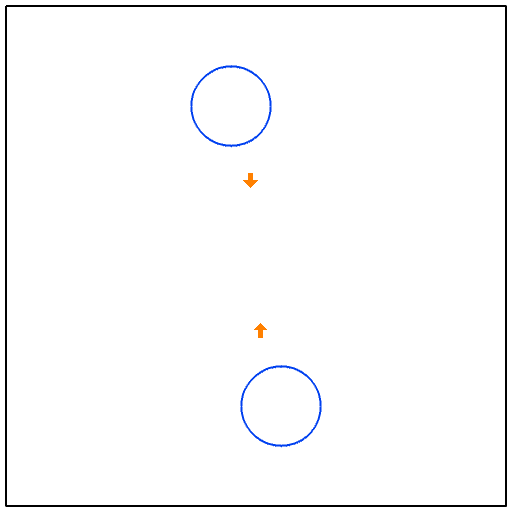