For all the help you need with Armagetron!
Post Reply
8 posts • Page 1 of 1

I'm trying to play Arma with my girlfriend, with the same PC.
I have two monitors and two keyboards and am using virtualbox with Win7 installed on screen two.
Everything works perfectly until, on my screen, I try to go to full screen, which pushes her screen away out to the right (just messes it up).
I could fix this if Arma would allow me to use my mouse on screen two whilst on fullscreen with Arma on screen one.

Any suggestions whatsoever would be appreciated, I'm not far from ripping out my own hair.
P.S. Please don't try and be a smart arse and suggest I get another PC because that's completely besides the point

I'll keep that in mind if it turns out there's absolutely nothing I can do.
I hate windowed mode though

. Not just that I hate it, I actually can't get it to be almost fullscreen. There always ends up parts cut out and whatnot.

I think the real problem may be that screen one is a HD TV, and screen two is an LCD monitor. So every time I go to full screen on Arma, my screen goes blue and it switches resolution.

So easy to fix if I could just use my mouse lol.
Tomorrow, I'm gonna try making the LCD screen one, and see if that helps because I can still use my mouse when Virtualbox goes to full screen with arma...
Maybe another thing I could try is using two virtual machines since it will let me use my mouse that way.

Honestly, I feel like I've came up with more solutions than I have all night from just replying

The problem likely resides in how the desktop itself is handled. Is her screen an independent desktop?

In Linux, at least, when you set up for multiple screens, you can have the second screen be one of several things: 1) a copy of the first screen (two people using the same screen, useful for some collaborative work), 2) an extension of the desktop, and you have to specify if it's up, down, left, or right, or 3) it's own independent screen.

In 1, the fullscreen mode would just give you two arma fullscreens, but both with the same instance.

In 2, the fullscreen mode stretches across both screens, and when there's a resolution disagreement, that results in a partial fullscreen on one screen and the other one simply being black.

In 3, you can have two separate armagetron instances running fullscreen.

So here's my question: Why not plug in a second keyboard, set your keybinds so the two of you don't clash, and run just one instance of arma on the big screen, and play two players on the same computer? You get a split screen for that, which arma handles nicely.

Offtopic: now that I'm playing around with xbox360 controllers, I need to check out arma's joystick capabilities. I might have some default configs to give for these controllers (I'm working with emulators right now, really loving the retro-gaming thing)

Edit: There is a mouse-grab config item somewhere. I remember seeing it in a config screen at one point, but it may be a console-only setting. Arma grabs the mouse by default, because by default the mouse is a camera controller.

Lucifer wrote:Edit: There is a mouse-grab config item somewhere. I remember seeing it in a config screen at one point, but it may be a console-only setting. Arma grabs the mouse by default, because by default the mouse is a camera controller.

It's "grab mouse" in "Screen Settings". I'm not sure how it interacts with fullscreen mode, though. 0.2.8's fullscreen mode is supposed to turn unused screens black. Only the recent 0.4 with sdl2 support is supposed to leave them on with visible content and additional options for fullscreen operation that may help (we don't have builds for that yet). On Linux, I'd just configure the window manager to keep arma's window borderless, but I don't think vanilla Windows can do something like that.

But yeah, running two virtualboxes sounds like one good solution, lucifer's split-screen, two keyboard one also would work (if the screens have identical resolutions and you don't mind the menus getting spread over everything).
Top

I've never been good with this screen stuff. I have AMD Eyefinity there and it just baffles me sometimes.
I use "extend these displays".
Then I have Virtualbox use screen two (which btw, is alongside screen one) and hit host+f, which gives her her own virtual machine on screen two in fullscreen.
So, now I have win10 (the host) on screen one and win7 (the VM) on screen two.
Now I run Arma on win7 and got to fullscreen. Perfect - doesn't effect screen one in the slightest.
Now over to screen one, run arma, hit fullscreen. Now screen two is messed up...

I was messing around with it again today and I realised that when Arma is in fullscreen, the host key stops working too. Arma takes priority over everything lol.

Anyway, using two VMs worked. So, I have a new question.
Here are my specs: 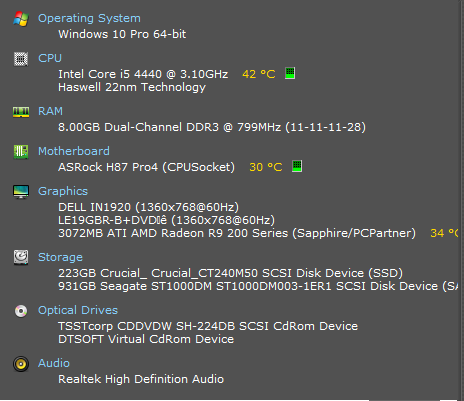 How much memory and stuff should I dedicate to each VM for the best experience of Arma for both machines?
Top

2 gigs per instance should be plenty for win7+arma.
Top

Thanks for the help everyone.
I have it working great now.
If you came in and didn't know, you'd ask where the PC she's using is

Anyway for anyone that wants to try the same thing, I suggest enabling 2D and 3D acceleration, and give your VM a good bit of video memory, or else you get crappy fps.
We both have 140-190 fps while playing (almost 500 each when dead).
Top
Post Reply
8 posts • Page 1 of 1