What do you want to see in Armagetron soon? Any new feature ideas? Let's ponder these ground breaking ideas...
Post Reply
29 posts

The basic premise for Clockwork can be found HERE

ALL feedback welcome, please let us know what you think of the game mode and any ideas for how to take it forward

Current suggestions, issues, ideas and problems summarised [will be edited and updated]:

Good to finally see this thread & looking forward to where this ends up.

One idea I've spoken about with a few of you is to have a prize for the winners. If we look at ladle, the only reward for winning is bragging rights which is meaningless to players who've already won a handful of ladles. The prize COULD be cash, donations can be made each month and the money being divided by 5. Or, other prizes such as gift cards or actual physical things [sinewav glow in the dark tron gloves + tshirt hollaaa] but that would be harder to divide over a team.

In any case, there definitely should be some kind of prize! Maybe even for 2nd and 3rd place [which would make room for a 3rd place match in the tournament!]

Another idea: STREAMING + COMMENTATING.
This keeps coming back and like last time we attempted it, nobody's actually putting in the effort. I would do this myself as it's not that hard, but I've moved and my internet is crap here. I can't stream anything, at all. Most of you will remember me and sinewav streaming and commentating a few ladles, it went fairly well. With free software such as Open Broadcasting [has excellent support forums too, please never use Xsplit, it's shit] it should be easy for some of you who DO have good internet to figure this out. We could advertise the stream during the tournament, maybe even have it linked to the main armagetron site [not like Zmen or Tanky are doing anything else with it

just played for a while with ogo and others.

-the zone spawn time is an awfully long time, maybe 60 or even 45 seconds.
-there are 2 random zones that hang around on the center line, are these needed or not? cause there a bit distracing
-imo the start is a bit fast, turns into a bit of a cluster **** sometimes.
-the spawner should be unlimited but if the enemy touch it, it goes down. that seems like a good option keeps the defensive side of fortress more prominant.
-i dont know whether its better to have the spawner removed when sumo starts or to stay
-there should be a time warning, e.g. 10 seconds left!
-the zone starts off small so if it spawns in a location where 1 team is closer they can end the round before any sumo arrises, i feel this is a bit unfair, fortress has no luck involved.

bilbo baggins wrote:just played for a while with ogo and others.

-the zone spawn time is an awfully long time, maybe 60 or even 45 seconds.
-there are 2 random zones that hang around on the center line, are these needed or not? cause there a bit distracing
-imo the start is a bit fast, turns into a bit of a cluster **** sometimes.
-the spawner should be unlimited but if the enemy touch it, it goes down. that seems like a good option keeps the defensive side of fortress more prominant.
-i dont know whether its better to have the spawner removed when sumo starts or to stay
-there should be a time warning, e.g. 10 seconds left!
-the zone starts off small so if it spawns in a location where 1 team is closer they can end the round before any sumo arrises, i feel this is a bit unfair, fortress has no luck involved.

1- could be tested sometime, at the start it was 120! but then it changed to 90 seconds which seems enought time to make a fight of territory, respawn and stuff.
2- the zones you see moving in middle is just a timer, they cross each other and when both reach the rim again there is when the Sumo zone appers.
3-good idea but think about it, you will have a player working just on respawning all the time. you can assing a closer player to the spawn so you dont let the enemy camp it.
4-there are hot zones where you have to take domain within the 90 seconds so you can always be close to the zone when it appears, obviusly the game is supposed to be played 5v5, if you play 1v1 there is more luck factor then its lower and lower with more people.
thanks for the feedback bilbo

Little bit sidetracked but when I saw this on trontimes I instantly thought of another gamemode but I'm not sure how easy it would be implemented. For anyone who has played call of duty imagine a Domination style game on tron, 3 zones, the base nearest your spawn, the middle base, and the base nearest your enemy spawn. Holding a base would give you 1 point per second or maybe every couple of seconds, so having 2 bases would be 2 points, if you lose your base you can't respawn. I think implementing kill score would still be necessary so that way people can't just respawn and torp the other team and be reckless. Zone control would be based like in Fortress, the team with more people in the base will control it, but instead of zones collapsing they would stay up like a king of the hill type zone. Not sure if this idea would work at all or even be doable, but just thought I'd put it out there if anyone likes the idea and is interested in trying to set it up. Obviously all the ideas here could be tampered with based on what works best. 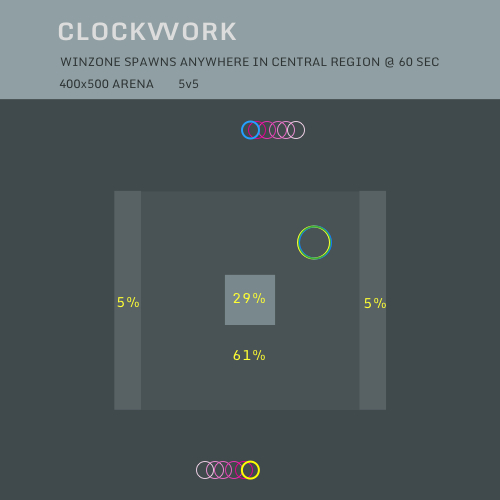 First thoughts: I don't like that the sumo zone spawns randomly. It shouldn't be random, imo. The gameplay before the zone spawns is very slow and campy which is what we tried to change in fortress. That's all for now, will play it more later.
Top

Pretty cool idea, but these are the things I don't really like:

- Grid is too big;
- Zone takes way too long to appear, I'd like 30 or 45 secs spawn time better;
- Zone starts out too small, what's the idea behind this? When the zone appears there's barely enough room for two players, and it usually leads to one team winning really soon after its appearance. Not much strategy and big fights involved here.
Top

more changes:
feedback about it being too small a zone is noted. (we tried 45 seconds, and it was too short). People should remember the intent of this project is not to have a new team sumo mode. The larger the zone and the easier it is to sumo, the less important the first part of the round is and more boring it feels. The point of the first 60 seconds is to control the map, so that you can win the endgame really fast and easily. Orion and I spent several hours testing all sorts of zones last night, and the size and settings of the current zone, while they still might be tweaked, are the product of a lot of testing already. So, while all suggestions are appreciated, we're going to keep the zone essentially how it is for the time being.

Similarly, the size and randomness has been tuned a lot. Making the grid smaller or the placement less random leads to more boring camping of spaces, not less. If for example, the sumo spawned in the center everytime, the whole round would be a proxy-sumo over the central area. It'd just be WST. The purpose of the randomness and the size of the map is to prevent camping from being a perfect strategy. There is too much space to cover, so other factors like speed and mobility come into play. Perfect strategies are what lead to stale gameplay, since you can "solve" the game (think of Tic-Tac-Toe).
Top

I like it right now. The diagonal res is also good; I've still walled people off but then again nobody has holed me on it yet (like in CTF when you have the flag vs a basecamp). But it's harder to pull off, and that's good imo.

Thank you for your work on this new game.

Good. I made it them move a little faster and more diagonally. They now hit the midpoint of a rim wall every 30 seconds, rotating clockwise, of course. 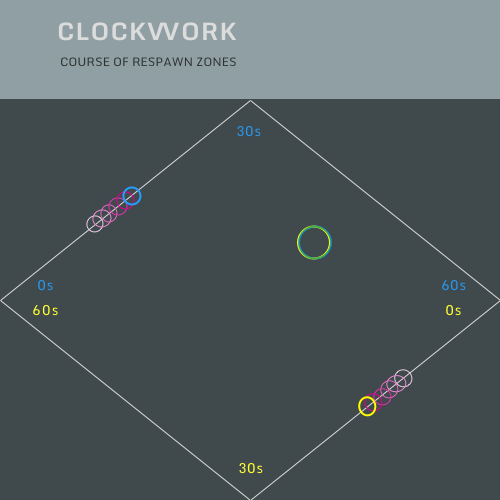 I made this change to make it harder to base camp but also to give a clear marker of halfway through the round and to bring the base closer to the action for the end of rounds. Having to chase the base down in a corner where you don't want to be was a hassle. Now it's closer to the action. 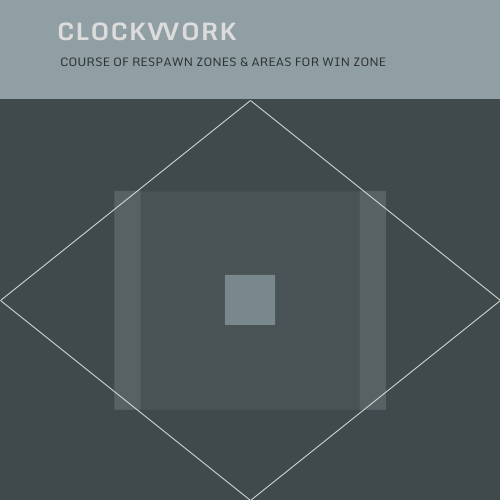 Here is their path overlaid on the valuable win zone regions. They don't interfere with most of the important territory, meaning accidental respawns won't be likely, but they still might happen if you're not careful.


Keep giving feedback in this thread, it's great. You can also leave feedback ingame, by saying something and tagging with the prefix CW.

not so much feedback, but the game mode runs a lot smoother in just a day or 2 of testing, well done community and well done concord <3
Top

- Right now the server is set to infinite walls which totally wrecks it. No chance to respond in case of an unlucky spawn, promotes getting lucky while camping instead of quick thinking and teamwork once the zone spawns. That part was the thing this game mode had, with it gone it's boring. Left disappointed after 1 match because of this.
- Server's set to 1 rubber, which I wouldn't prefer over 5 but eh it's alright. Don't know how it'd be with the old wall length and 1 rubber, might be good.
- Sumo zone looks a bit bigger now, can't comment on how it'd be with the old wall length right now.

I didn't make any changes between my last post and this one and, for the future, everyone should know that I will post any changes that are made. Part of the cfg went missing (probably accident cut/paste or deletion) and so the server loaded default settings. Should be back to normal now. Sorry for the scare/inconvenience.
Top
Post Reply
29 posts